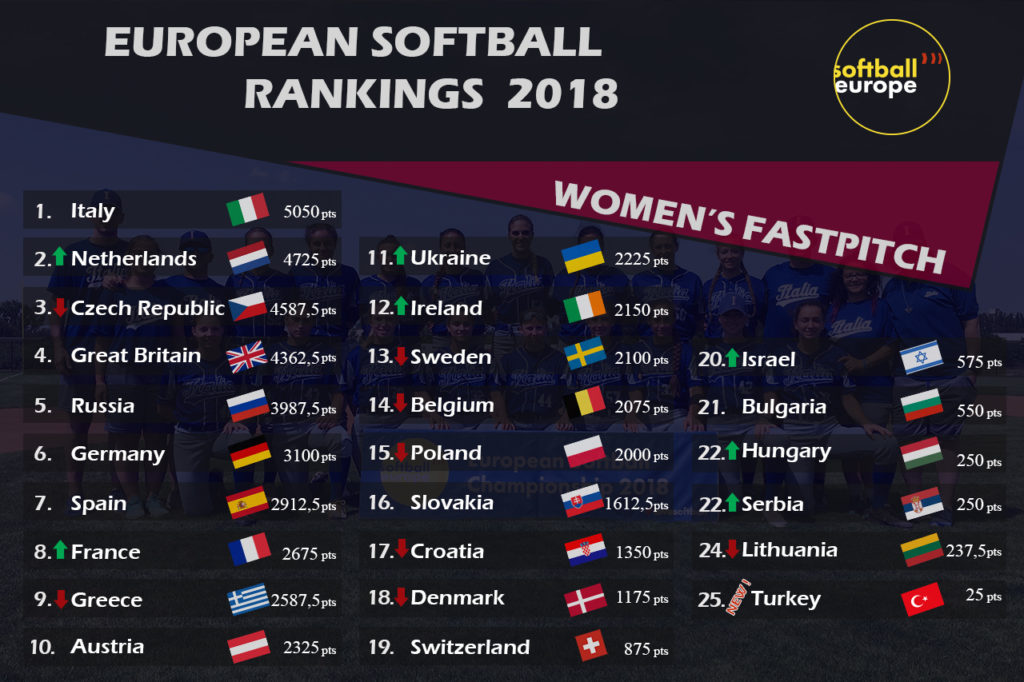 Ireland have moved up to 12th in the Softball Europe 2018 rankings which is a just reward for their European Under 19 silver medal and Under 22 bronze medal in July.

Ranked 23rd in 2016, the young Irish squad had continued to deliver on the international stage in 2018 and shocked Europe by reaching the final of the U19s the hard way beating European powerhouses Netherlands, Germany, Russia and Czech Republic. Ireland carried this form into the U22 tournament when the mainly U19 team with the addition of a couple of more senior players eliminated hosts Slovakia and followed this up by beating Greece, Russia, Poland, Czech Republic and number 3 in Europe Great Britain for a hard earned bronze medal.

Speaking on the 2018 achievements Head Coach Melanie Cunningham said ” I am delighted for the players, the programme and Ireland that our hard work and success are recognized in the European rankings. We are a programme still in its infancy which first competed in 2015 and to jump 11 places in such a short period is an amazing achievement. I would like to thank the Players, our coaches, the Players families and all those who have made sacrifices to make this possible.”

Coach Cunningham added “We are a still growing as a programme and 2019 will give us an opportunity to build on this success as we compete in the European Championships. Our target is a top 6 finish in order to qualify for the final Europe/Africa Olympic qualifier and keep our Olympic dream alive. We also have a Junior World Championships in August to look forward to as well as a number of other important international tournaments. Our challenge is finding sponsorship and funding to turn this real potential into reality as the Irish Women’s Fastpitch team continue receive zero funding.”

Details on how European Softball Rankings are calculated and previous year rankings can be found here: http://www.europeansoftball.org/ranking/