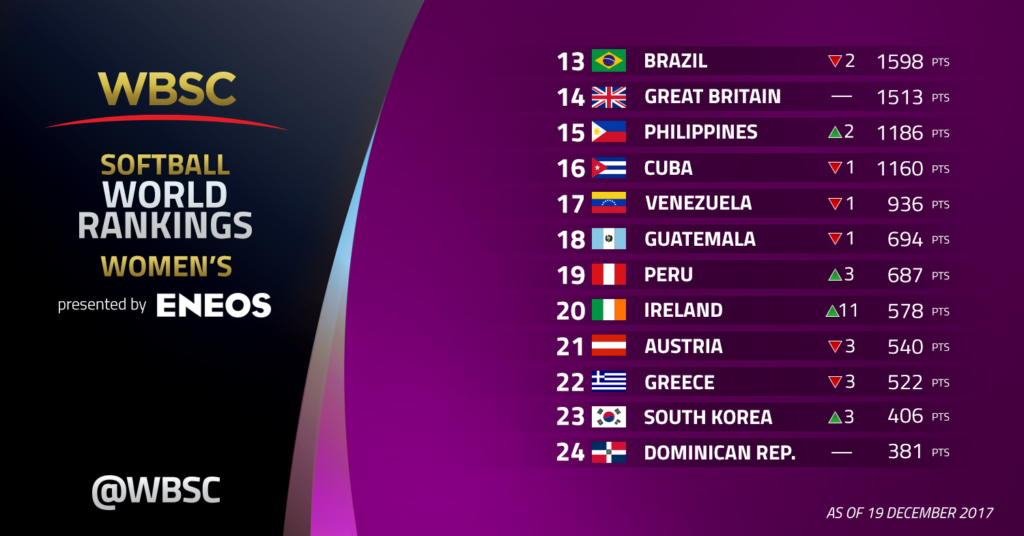 Just 3 years into its Women’s fastpitch programme, Softball Ireland is thrilled to announce that Ireland have become the No. 20 ranked team in the world according to the World Baseball Softball Confederation (WBSC) Women’s World Softball Rankings released today. Team Ireland are now the fifth highest ranked European team in the World. Ireland’s World Ranking points are based on 2 years of tournament play compared to the 4 years of most other nations.

“We are delighted and honoured to have Ireland ranked No. 20 in the Women’s World Softball Rankings and to be the fifth highest ranked European team considering we only introduced Fastpitch, the Olympic variation of the game, into Ireland in 2014” said Softball Ireland President, Colum Lavery.

“I wish to congratulate the players, coaches and management staff of our Women’s and Junior Women’s National Team Programmes who have put in countless hours to help Ireland break into the Top 20. We look forward to the opportunity to climb even higher in the rankings during the Junior and Under 22 European Championships in 2018.”

Team Ireland, in only its second ever European Championships in 2017, finished a historic high 15th as the team continues its progression up the European rankings. As part of its preparations for the Olympic qualification in 2019, Ireland introduced 9 new caps to the team.

Softball Ireland is a “not for profit” organisation and have no paid employees and rely on volunteers from our membership for the management and administration of softball in Ireland. Where necessary, we outsource for the delivery of certain services.

Softball Ireland is managed by a Board that includes an executive branch consisting of a president, a secretary, and a treasurer. There are approximately 800 softball players in Ireland playing on approximately 40 teams. The majority of teams are located in the Greater Dublin Area with the remaining teams spread across the country and playing in centres such as Belfast, Cork, Galway and Limerick

About the World Baseball Softball Confederation

Headquartered in Lausanne, Switzerland — the Olympic Capital — the World Baseball Softball Confederation (WBSC) is the world governing body for baseball and softball. WBSC has 202 National Federation and Associate Members in 143 countries and territories across Asia, Africa, Americas, Europe and Oceania, which represent a united baseball/softball sports movement that encompasses over 65 million athletes and attracts approximately 150 million fans to stadiums worldwide annually.

The WBSC governs all international competitions involving official National Teams. The WBSC oversees the Softball World Championships (Men, Women, U-19 Men, and U-19 Women), Premier12, World Baseball Classic, and Baseball World Cups (U-12, U-15, U-18, U-23 and Women’s).