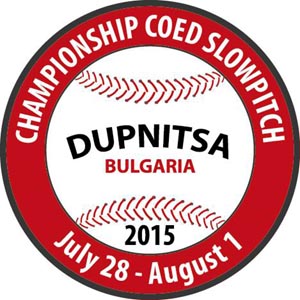 These are not Bulgarian phone numbers. These are not the dimensions, in inches, of the gazebo that protected our players from the sun in the afternoon games. These are not the geo-coordinates for the exact spot where the two fences join at the shortest part of the field that Frank managed to eek a hit over for a HR.

These are the At Bats, Runs, Hits & RBIs for the Irish and German teams in yesterday’s epic softball game that had more twists than a really twisty thing tied in knots and used as a demonstration at a loom band fair. (D’Oirish are the top line).

The game lasted 8 innings and 2hrs 5mins. Thankfully this was a 9am game and not midday. Had it have been several of the players may have keeled over from heat exhaustion. So, where to start…well…in the first inning…

5 runs in the first. This was a good start. We got a little lucky with some errors in play but we worked our way around the bases and brought in a decent first tally. The Germans had lined up a strong team and we were told by our coach we needed to work hard and focus. In the bottom of that first inning we gave back the two errors but managed to hold the Germans to just 3 runs. My highlight has to be my roomy hitting it OUT OF THE PARK. Frank hit the ball and it sailed gloriously through the Bulgarian air. We were sure it would be extra bases but didn’t realise that Frank had banked the ball off the main fence and over the smaller fence to the left. As he rounded 3B he still looked a little unsure of what had happened. I’ll tell you what had happened, he busted that inning open with a knock to centre field and with the two BatPak ladies on base he brought in 3 runs.

This homerun was brought to you courtesy of Ballistic Strapping – For all your hamstring needs. Bulglastic, strapping Frank’s leg for over 20 years. Each straps sold separately. Straps cannot be exchanged for smooth chat-up lines or haircuts. Bulglastic Strapping is the trading name of KBC bank. May contain nuts.

But I digress. For the next few innings the score remained similar. We managed 2 more runs in the 2nd inning but held Germany in both the 2nd and 3rd. Then the Germans came back at us. They produced some hits, scored 2 more runs and threatened more as momentum started to swing. With 2 outs and a runner on we seemed a little rattled. Step up Norma McIntyre. As the batter hit the ball high in the air the runner took off and was sure to score. The ball looped in to an area where you just knew, “This was trouble”. Matt reeled back from 2B, with his shirt on (much to the chagrin of the spectators and Pete), trying to stay under the ball. Barry was moving at speed from centre field to try and make a play. From my view I didn’t think either had a shot at a catch. Barry would have to lay out and Matt seemed to be distracted by a protein bar wrapper on the ground. I think he fell over.

As the Irish bench sucked in whatever air was left at the time, considering the tension, “Too Cool For School” Mac & Cheese stole the show. Everyone forget about her tracking the ball from right field, and just at the last second of her run in, she slid and stuck out her glove at her shoelaces. The sound of the ball landing securely in her glove, and the final out of the inning was greeted with a roar and huge exhale from the dugout. In celebration she flung the ball to the sky. Luckily James O’Farrell wasn’t umpiring and the “Lost-In-Transfer” ruling avoided.

This got us going. We scored 4 runs in the next inning. MO MEN TUM. We were rolling and 11-5 up. What happened next frightened the bejaysus out of us. 10 runs from the Germans highlighted by a 3 run HR to right field. What had seemed to be a game in our hands had just been taken away. But this Irish team showed grit and determination. Going into the 6th inning we were facing a 15-11 score line in favour of the Germans, and that momentum pendulum had swung again. We managed to score 2 more runs, but left the top with the bases loaded and stranding 3 runners.

Germany then rubber stamped their lead with two more runs. It was 17-13 in the top of the 7th. Step up Baaaarrreeeee Caaaasseeee. We need 4 runs to tie…here is what happened.

6 hits and 4 runs, highlighted by Barry’s homerun and we had tied it up. The crowd goes wild! Barry was having quite the day at the plate and when the pressure was on the Irish line-up backed him up with single after single.

These extra innings softball are brought to you by

Zagorka Gazebos – Have you seen how hot it is out there?

Steerman Dating – Singling since Wednesday at 10am

Turkish Air – Book your flight online today! It only takes a minaret.

In extra innings here they place a runner on 2B, to try and speed things up. So Cli was put on two and our top of the order was up. I said this was to speed things up, but the Irish were going nowhere. Not until we knocked in 6 runs and gave the Germans a touch target to chase in the bottom of the inning. The hit parade rolled on through 9 batters and we got the feeling we had done enough. The Germans mustered 4 hits and scored 3 runs but Panda’s pitching had them in knots in that final inning and the three outs were all flies to the Irish outfield.

As the Czech and GB teams looked on the Irish huddled around 1B after what was easily the game of the tournament so far. Played in the best of spirit with fantastic fielding and batting from both sides it was a great promotion of our sport.

We gathered our gear and left the dugout to find shade, revelling in the fact that we came out on the right side of a long, close game. At this stage the post-match awards were given out with Sarah Nolan picking up one of her many booby prizes. I’ve lost count of how many she has won but at least I didn’t leave my jersey back in the hotel of forget to give back the previous day’s post-match award. Let’s just say she is having a special week.

We had a few hours break before heading out to the second pitch for a double-header under the afternoon sun. Up next was Czech, who would have lost to GB by then, and Lithuania. Myself, Senan and Sully went out to take a look at the field. The diamond was in the middle of the local soccer stadium so right field was shorter than normal and thus a ground rule was in effect. Anything over the fence, from a certain point in the perimeter was given as a ground-rule double. Looking back, one in left field would have been good for us too, as one of the Czech big hitters launched two mammoth shots the length of the field, during the game. Sully pulled a big hit over RF and into the UPPER DECK!! of the stadium which would have been a homer in any other ground but was ruled a double.

I have a game to get to so I might just explain quickly that we seemed to dip a little in this game. The heat was energy sapping and the intensity seemed to fall off a little. Perhaps the 8 innings of ups & downs took its toll. We had spent so much energy rallying and fighting back against the Germans that we weren’t ready psychologically for the Czechs. They cheered louder than us, hit the ball better than us and looked more like a team that wanted the game. We were unlucky with a couple of ABs, ok, but generally our batting wasn’t up to the calibre of the previous game. Some exceptions are Andy Kavanagh who seemed to single all day and Frank, who was maintaining his hot batting seemingly looking to get involved all over the diamond. At one stage he slid into 3B under a tag, and the fielder and proceeded to, what looked like, take her for a rodeo, as he came up from under her legs carrying her on his back!

This Rodeo is sponsored by Franks Ribs.

Frank Ribs. The Rib of the Irish National Team. Find us at exit 10 on the I94

Tuesday is Ladies Night. Call in and see Frank for the best ribs in town.

So we lost the game 15-3. A dressing-down was required and duly administered in the dugout by Senan. The key points being “focus” and “concentration”.

It was a tough thing to take, considering the heat. The temperature hit 40 degrees and the ground got drier and harder. It felt like the middle of a dust bowl at times. The Lithuanians were up next and we knew they had ballers throughout the line-up. They may not have the slow-pitch experience but all the skills were there and if we were not on our game or smart running the bases they would take advantage.