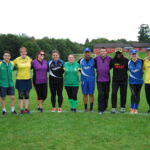 This week, on the 31st March 2021, Softball Ulster celebrated its 13th birthday. Established in 2008, SU has now grown to become the second largest regional association of softball on the island of Ireland. Current Softball Ireland President Colum Lavery signed Softball Ulster into being during his previous role as SI Secretary – you can view the original letter below, shared by Andrew Craven the current Chairperson of SU. The first Chairperson of SU was Carrie Trundle, who worked hard to earn recognition for the Ulster teams and bring SU into being.

If you want more information on the history of Softball Ulster, or the sport of softball in general, why not visit their website at: www.softballulster.com!