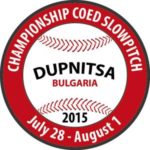 “Well its game-day folks and welcome to a sunny & hot Dupnitsa. I’m Chest Greatly and joining me in the booth for today’s opener is Tramp Wendell-Frankly. The traveling Irish team will look to kick off their tournament with a win over the much-favoured softballers from Great Britain. A win for Ireland against the European heavyweights would be the first in a number of years and kick-start what promises to be an
exciting and fruitful week for the group of ballers from the Emerald Isle. Playing most of their softball in the Leinster Premier Division, this talented bunch could really put the two birds amongst the apple cart and ruin an otherwise sunny day for the GB squad. Tramp, what are your thoughts?”

“Thanks Chest. I see the GB team knocking in 19 runs in the top of the first and effectively putting the game to bed.”

As it panned out Ireland’s first game in this tournament ended in a 23-2 drubbing. Someone said there were 13 base hits in a row at one stage. Throw in some miscues and a couple of errors and the Brits were
out of sight.

So with that part behind us I’d like to focus on something that mattered more. I led my country today. We jogged as a unit in Green & white, out onto the field at an international sporting event. We stood tall, a line of Irish softballers, facing our country’s flag and sang Amhrán na bhFiann. I couldn’t have been prouder. The Goosebumps were there and the anticipation, nerves or butterflies were there for all of us I’m sure. There are several new players this year and I hope that they experienced the same feeling I did and remember it. It’s an honour to play for your country and not one that should be considered lightly.

We had a 2 hour break in between games and while some of the team returned to the hotel I stayed around the pitch to watch some of the other teams compete. The Czechs and the Germans played out a game with the latter coming out on top. Despite a late rally from the Czech squad. The next game saw Lithuania take on GB and unlike us they held the GB batters to 3 runs in the first. They proceeded to load the bases in the bottom of the inning, with line drives, and threatened to make this a contest. Unfortunately for them they stranded all runners and eventually they succumbed to the GB bats.

“One things for sure Tramp, it is hot here. I see the mercury rising over there like a called infield fly. Still though, like they say – “Heat never bothered anyone with sunscreen and a good handle of the metric system”

“Chest, you don’t know the infield fly rule and you never will.”

Our second game of the day was against the tournament hosts and while they started with only 11 players they hit the ball hard and over the fence at one stage, bringing in 3 runs. After 2 or so innings the game was tied and then it happened. The hits came in a string. Ruth, Barry, Matt, Andy all contributed to the scoring. With Sal leading from the front we were pulling away from the Bulgarians and eventually the game
was called on the run ahead rule and ended 21-5 to Ireland. The first W was in the book and the smiles widened.
If I may for a second digress to some smaller points of interest – Sal struck out looking. Sal has a Thunder-Buddy. That means when Sal looks like he is going to blow his top and scream “Aye Carumba” Matt has to remind him to dial it down. Matt was quite effective as Sal glanced back at the umpire – who was calling the strikeout –  before making the “Totes Awky Mo Mo” walk back to the dugout. One small call of
“Salvador” from Matt and the fiery lead-off was put in his box. Ciara ran a suicide squeeze on her own. Running from 1B with all her might she buried her head in jersey and powered around 2B on her way to 3B. Now at this stage the base-coach’s stop sign was clearly on and the “hold” yell administered. Nothing. That little train who thought she could kept chugging for 3B, all the while the Bulgarian fielder
caught the ball and had time to turn to tag the Kamikaze express, serve 16 beers at the tent, re-fill both teams’ water coolers and ferry the GB squad back to Hotel Rila in the bus, before tapping Ciara gently on the thigh, about two feet from the base.

“Still though Tramp, you’ve got to admire the moxie of that girl?”
“You’re insane Chest. It’s getting very difficult for me to stay with you.”

I’d like to tell you about what’s need to represent your country in softball. You need to know the rules of the game, have a certain level of skill which can be applied to the chosen sport, you need equipment and you need a garment that identifies you as part of a team. Mark clearly felt that today would be his day not to be identified and left his jersey in the hotel. Kangaroo Court convened and Mark was sent down after being found guilty on all counts.

“That young man is a trend-setter Tramp. He plays by his own rules, and I for one would like to salute him. A real pioneer of our day” “Chest, I’m leaving you, it’s over”

Before I wrap up todays blog I’d like to reiterate what I said yesterday. This is a special group of players and the mood is good. We played hard today and did our jobs. Everyone is digging in to make sure the week goes as smoothly as possible. It’s a great bunch to be with. When we got back to the hotel we all enjoyed another cool down in the spa & pool and then myself and Frank entertained most of the team in our spacious and well-appointed suite.

A shout out must also go out to the crew organising the event. Peter and his team are the most welcoming and helpful people and the kids milling around the grounds and stands create a great atmosphere. So thanks.

“Tramp, those Irish sure look a little jaded & scalded from today’s play in the mid-thirties. I’m sure a soak in the pool and a nice traditional Bulgarian meal is all they need to recharge their batteries. Maybe a cappuccino in the square afterwards. Care to join me for a coffee Tramp? Tramp….TRAAAAAAAAAAAMP”