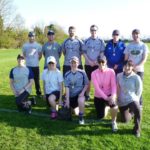 Opening day of the season for Softball Ireland saw 12 teams compete in glorious weather for the Brian Walshe Cup, Plate and Bowl.

The Slowpitch National Squad would like to thank you for all your support on the day and help in offsetting some costs of playing at the tournament in July.

Best of luck to all teams starting their league campaigns in Softball Leinster this week.

When did you start Softball?
I started in 2009.

Why Softball??
My dad saw an advertisement on Gumtree for an Introductory league run by Softball Ulster, so I decided to go along and try it out! We were split into 3 teams, trained in the basics like batting and throwing and then played matches over a couple of weeks. After the final week those interested in continuing with softball had a meeting with Softball Ulster who helped those of us start a team. We formed Belfast Sliders Softball Club and played the second half of the 2009 season – 8 of the original group still play!

Have you played any other sports?
I played Camogie until I was 18/19, and I currently play hockey for Pegasus and Baseball for Belfast Buccaneers.

What club do you play for?
I play for Belfast Sliders in the Ulster League.

Do you have any pre match routines?
No.

When was your first international game?
I played for Team Ireland at Diamond 3 in London in July 2014.

What can we do to continue to getting people interested in Softball?
I think things like social media and “word of mouth” help Softball as it’s one of the those sports locally a lot of people don’t realise exists, while events like introductory leagues or open days are a great way to boost participation.
I also think if we could get people involved from a younger age it would really help the develop the sport, as a lot of people are either established in a sport or are not longer interested in playing sport by the time they would be allowed to play softball.

Are you sponsored?
No – it’s all self-funded, so we also do fundraising to try subsidise the costs.

What’s your international Goal?
This summer I’ll achieve my first goal when we compete in the European Championships. I want to be part of a medal winning Irish squad.

Who is your favourite female player?
I couldn’t pick one, I’ve trained and played with some brilliant girls and it helps push me to improve my own game.

Who is your favourite male player?
Again I couldn’t pick one – you’re continually learning from the people you play with!

Which countries have you played Softball in? Where was your favourite?
Back in 2009, I travelled to Hluk in the Czech Republic to play in the Burcak (Young Wine) Tournament, up to that point I had only played a couple of games within the Ulster league so it was an brilliant experience.
In July 2014, I played in England at the Diamond 3 tournament. It was my first time playing on proper diamonds and the standard of softball was so different to my normal league. I couldn’t pick a favourite – both were great experiences for very different reasons!