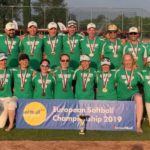 Ireland have won a deserved bronze medal at the 2019 Co-ed Slowptich Championships.

Following on from the disappointment of missing out on the final after defeats to the Netherlands and Czech Republic on Friday, Ireland got a chance for revenge as they took on the Czech Republic in the bronze medal final.

Ireland took an early lead in the game and unlike Friday, never let the Czech Republic back into the game with great defence and more importantly kept the score-board ticking over every inning. Truth be told, Ireland always looked like they could match Czech Republic on the scoreboard and bar a couple of hairy moments controlled the game, winning every inning on the scoreboard bar one. Ireland eventually won out 17-13 to bring home a bronze medal.

Speaking on the medal, Softball Ireland President Colum Lavery said “On behalf of all the members of Softball Ireland, I wish to congratulate Senan, the Players and Coaching staff on thier bronze medal. We all followed the ups and downs as the week went along and we are immensely proud of the way the team regrouped on Friday night to come out on Saturday to give such a dominant display. We are very proud of how they performed and we could not ask for any better representatives of our Country”

Next up for Ireland is the World Series in September.